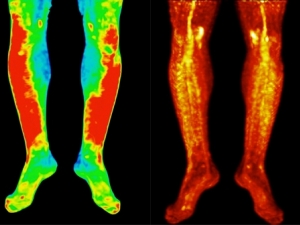 The inflammation we see in psoriasis is similar to what we see in atherosclerosis—a type of heart disease that involves the build-up of fats, cholesterol and inflammatory cells in the artery walls. Could a drug used to treat psoriasis patients also help people with aortic vascular inflammation? A team led by Joel M. Gelfand, MD, MSCE, tested that idea.

They found that an antibody used to treat the skin disease psoriasis is also effective at reducing aortic inflammation, a key marker of future risk of major cardiovascular events. In collaboration with the National Heart, Lung, and Blood Institute, the Penn team led a randomized, double-blind, placebo-controlled study. Patients who took the drug ustekinumab saw a 19 percent improvement in aortic inflammation, as measured and confirmed by imaging, when compared to the placebo group. Dr. Gelfand presented the findings at the 2018 American Academy of Dermatology Annual Meeting in San Diego.

Ustekinumab, sold under the name Stelara, is approved by the U.S. Food and Drug Administration to treat psoriasis, psoriatic arthritis and Crohn’s Disease. “Since ustekinumab blocks the specific pathways involved in in both skin and cardiovascular inflammation, we wanted to test whether it can improve aortic vascular inflammation,” Dr. Gelfand said.

Psoriasis, which affects more than seven million Americans, is a chronic inflammatory disease that causes skin cells to multiply faster than normal—resulting in raised, red patches covered by silvery scales. In moderate to severe cases, it carries an increased risk of heart attack, stroke and premature death—a finding Gelfand established in a 2006 landmark study.

The results are consistent with a previous, smaller uncontrolled trial of ustekinumab and contrast directly to two previous large trials using a different drug, adalimumab (sold as Humira). Dr.Gelfand's team recently conducted its own trial regarding adalimumab and also found it had no effect on aortic inflammation.

“This is the first placebo-controlled trial of a biologic drug to show a benefit in aortic inflammation, a key marker of cardiovascular disease,” Gelfand said. “The effect is similar to what we would expect if we put the patient on a statin.”